Inspired by the ceramic works of my father Job Heykamp I decided to try to transfer my visual language from photography into ceramics. I imagine monumental ceramic tableaus in which the skin/ surface plays a big role, just like in my photographic work, combined with the possibilities of the camera obscura. Extensive material studies, especially into glazes,  were needed. I started the project by doing a residency at the European Ceramic Work Centre, followed by a period of research at my studio, which led to the development of the Photographic Hammer. 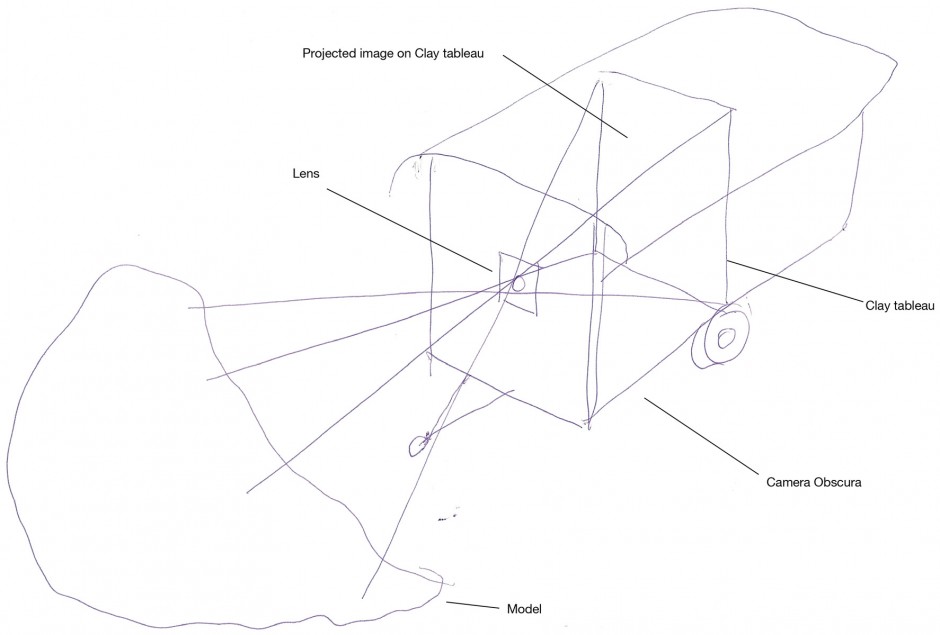 In 2010 / 2011 I was an artist in residence at the European Ceramic Work Centre (EKWC, a centre of expertise in the field of ceramics in Den Bosch, NL). My goal was to continue my work with camera obscura’s in a different medium; ceramics.  At the EKWC I developed a method to make large format ceramic reliefs using a camera obscura. An extremely volatile medium meets the timeless nature of ceramics.

Finding visual solutions to transfer the projected camera obscura image to a wet clay tableau; translating visual to tactile.
Working with glaze makes me a painter; can I maintain myself as such?
Researching the impact of the difference between a ‘live’ projection in the camera obscura and a projected ‘fixed’ image.
Researching the way color and structure are formed in ceramics as base material and top layer interact. Compared this to pigment in a photographic emulsion.
Finding parallels between glazes and photographic blur.
Researching the role of colour as a time indicator in photography.

How to mount wet clay on the (vertical) projection panel and how to prevent it from falling down.
How to make, dry and fire large slabs of clay without cracking or warping.
Glaze research; finding a variety of suitable glazing techniques.
Making the result weather and frost resistant, suitable for outdoor/ architectural applications. 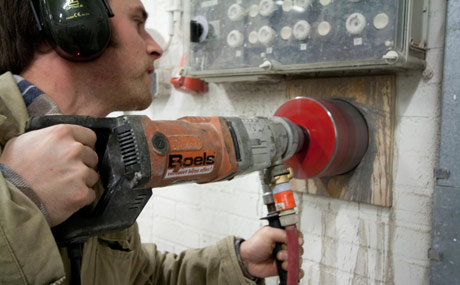 The first step of my project was to do research at the EKWC, where I converted my studio and adjacent clay storage room to a camera obscura. 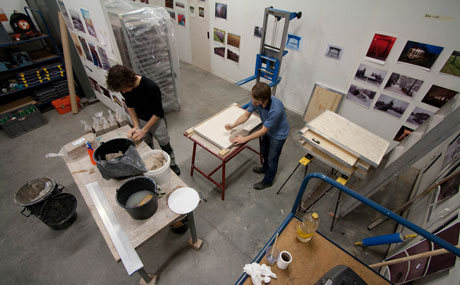 Inside the camera obscura I expose the projection directly onto wet clay. I experimented with ways to produce and vertically mount wet clay panels. A challenge was to prevent the clay from falling down, warping or cracking. 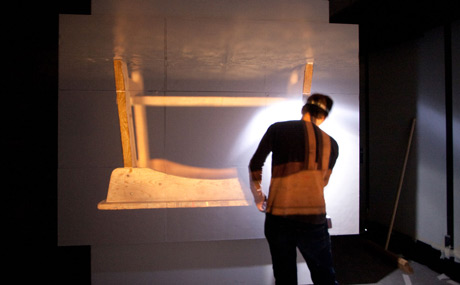 The camera obscura projects an image of objects placed in front onto the wet clay panel. I tested different approaches of transferring the projected camera obscura image to wet clay tableau; translating visual to tactile. 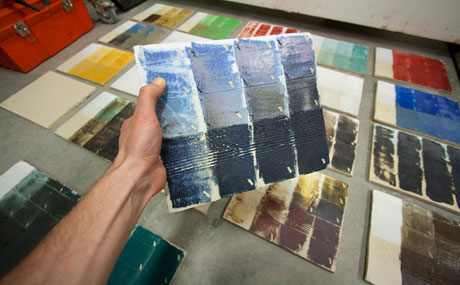 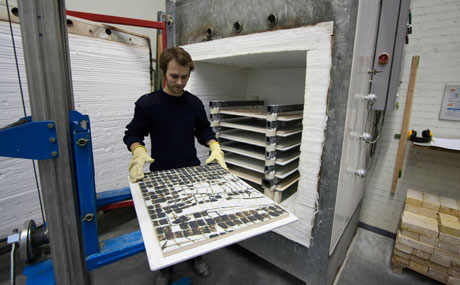 Different approaches to drying slabs led to the development of a new aerated drywall sandwich drying system, making it possible to create large panels without warping or cracking. 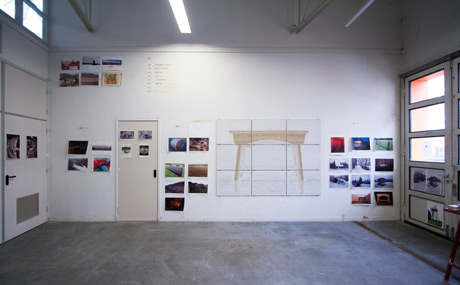 A selection of works and tests made during my working period at the EKWC.

This project has been made possible by the generous support of:

– The Fonds BKVB  (now Mondriaan Fund, the Dutch national fund for arts and cultural heritage) made this project possible with a research grant
– The European Ceramic Work Centre (EKWC) provided me with a budget to cover material costs during my research period
– The Jeanette Hollaar Fonds made a contribution for installation costs of the kiln in my studio 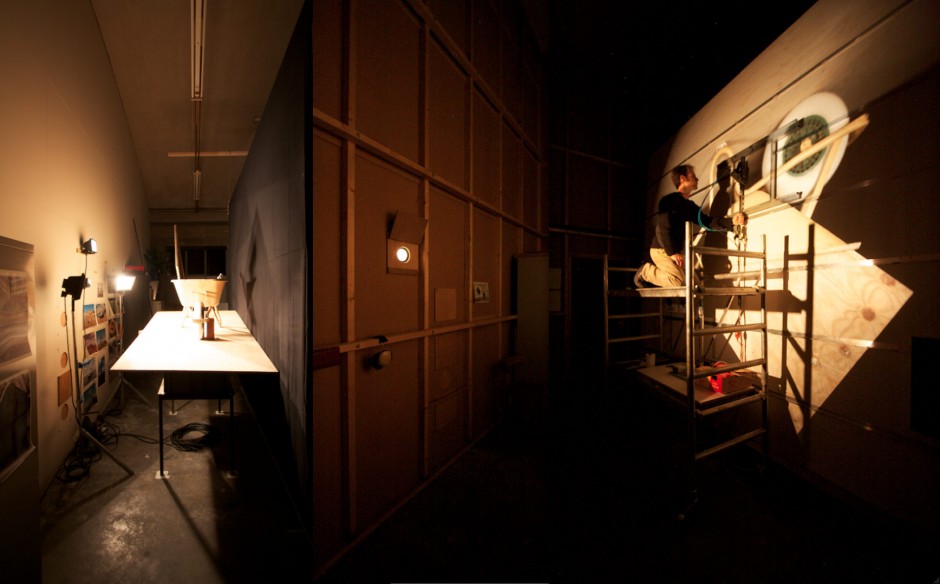 Testing the prototype of the Photographic Hammer

Returning to my studio from the work period at the European Ceramic Work Centre I implemented the new discoveries in Camera obscura #4. I set up my own ceramics studio (installed a large gas fired kiln, built drying racks, bought mixing equipment and glaze materials) and started experimenting with large format projections on clay. A bigger projection panel inside the camera was build so the works could grow to an architectural scale (3 x 4 meter). Mechanical aides were developed to hammer the projected image inside the camera into clay: The prototype of the Photographic Hammer. As the scale got bigger and the details more refined the work became more laborious. Soon the engraving became exhausting. I decided that if I wanted to continue to develop the work on an architectonic scale while retaining control over the detailed result I needed to scale up the Photographic Hammer.

Together with Machinefabriek Eysink from Deventer NL the plan was born to make a larger and more advanced version of the Photographic Hammer. We were happy to be given the oppurtunity to develop this by winning the =MEER innovation award for co-creation, issued by the Province of Overijssel, NL. 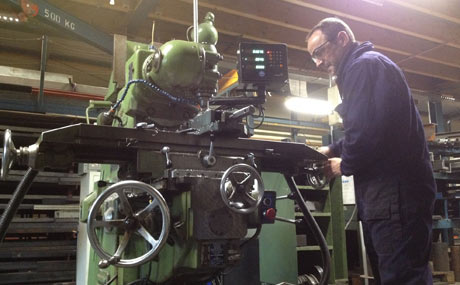 In close collaboration with Machinefabriek Eysink the new CNC controlled photographic hammer was built. It was great to get their support in the design and building phases. Below you find pictures of the building proces. Information on the finished machine can be found here: The... 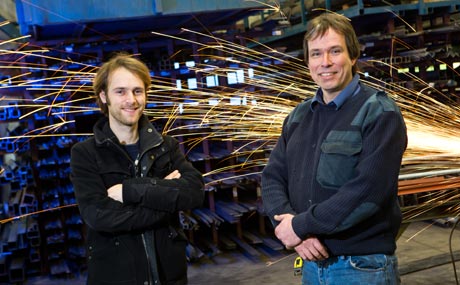 The Photographic Hammer has been awarded the =MEER Innovation Prize for co-creation! 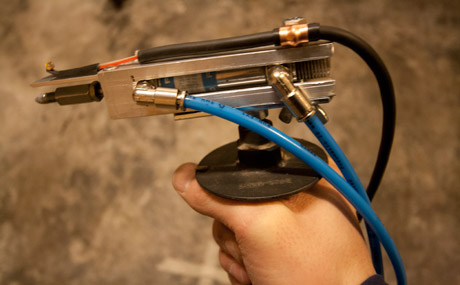 First prototype of the Photographic Hammer

Below you can see the process of construction and use of the prototype of the Photographic Hammer. I developed this device to translate the image projected inside a camera obscura into a ceramic relief. Inside the camera obscura in my studio in Deventer a large...